Safety note for folks not used to working with the mains:
All electronic parts of this DC-51 motor controller are connected to live mains and could kill you – this includes all six of the exposed metal terminals at the back of its plastic enclosure, and everything inside the enclosure.

And, any of the following text could contain factual errors

The maximum output of the DC-51 needs to be restricted to protect the 150W motor, which meant, as there are no instructions, understanding how the controller works to make the necessary adjustment.

There followed a late-nighter (and early morninger) with the board, photos of the board, pens, a highlighter, a soldering iron and a multimeter (it would not have taken quite as long had the 25mΩ current sense resistor been de-soldered earlier to ease confusion over the analogue reference rail…).

And I am quite impressed with the DC-51 and its facilities – I have a sneaky feeling it is similar to controllers used in treadmills – it might even be a re-purposed treadmill board (given time, I will try to draw the circuit out and add it to the blog). 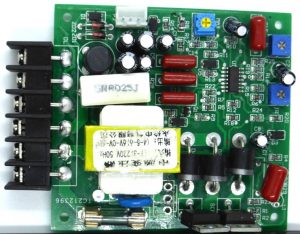 This DC-51 board (right, heatsink removed) seems to have presets for:

BTW, there might also be a reason why some DC-51s are described as having different max output voltages: resistor R8 (a 5k6 here) is in series with the max speed trimmer, and has been soldered in by hand after the rest of the board has been machine soldered.

The current limit is a constant current type, with a time constant (if I am right) of ~3.2ms, so under one mains cycle and has no facility for temporary over-loads.

To calibrate the current limit (if it can be set to a seventh of its nominal value), the idea is to find some old incandescent mains light bulbs for a test load – if only I had not binned mine during the Great Purge.

Speed droop compensation is particularly welcome as, combined with the current limit, it means the motor can always deliver maximum torque within its rating.

If I am not mistaken, it is an ‘armature resistance compensation’ (‘IR’) type – which I had not even heard of two years ago, before needing to build a rotating test rig for something else.

In my limited understanding, one way to calibrate this is to set the motor running, then turn up the compensation until the motor starts to oscillate around its set speed (to go fast-slow-fast-slow-.. on its own) and then back-off the adjuster until the oscillation stops and the motor is running at a constant speed again, then back off the adjuster a bit more.
This last step is because motor resistance changes with temperature and it might start oscillating again as it warms up. Ideally (in my understanding), the adjustment should be made with the motor cold and at maximum temperature, and a setting found where it oscillates at neither, while not loosing too much speed from no-load to full-load.

As an aside, the power circuit has two thyristors (isolated tab, labelled S8025: 800V 25A) and two fat diodes in a bridge, forming a ‘half-controlled rectifier’ (thus plenty of EMC emissions), plus a big reverse-parallel diode for the motor. The pcb-mount transformer is rectified, smoothed and Zennered to produce local positive and negative rails with a central connection that is tied to the motor’s most positive terminal – so the +ve and -ve rails are very much live mains and follow the rectified 230V positive motor waveform. 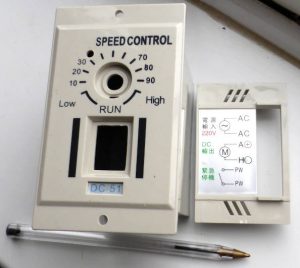 Concerningly, the stop switch terminals (‘PW’) on the outside of the back of the original enclosure (left) are at the same ~230V potential as the motor positive output (although the green characters next to it might say this – please comment below if you can clarify).

So, even in its original enclosure, the DC-51 is only a controller for experts, and not for the uninitiated.

I wondered if the board’s led (above ’30’ in the photo left) would indicate something about the current limit status, but instead it seems to be wired across the internal op-amp supply rails and would only differ from the neon inside the front panel switch (removed in the photo) if the internal fuse had blown.

Would I do it again?

No, not if I could get the appropriate latest-generation Sieg board 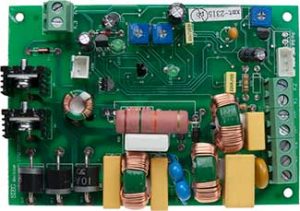 Despite the high price of a new board – right £107 from Arc Eurotrade when they are back in stock – and maybe the need to buy a replacement control potentiometer at the same time (the potentiometer/switch is different in earlier models, and has to match the board), I would buy a Sieg original replacement rather than doing it the way I have.

This said, all machine tools need a proper ‘no-volt release’, and I do not know if one would have to be added even with the newer Sieg boards.

7 Fraudulent Activities That’ll Rise In 2021 & Beyond

Not By Spam Email Checker Alone