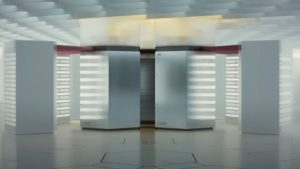 The figures were presented by IBM at a quantum computing event held at its Zurich research centre today, which followed its Quantum Summit in the US last week, when the 127 qubit Eagle computer was announced.

This is the next in a series of bird-named computers, following on from Falcon revision 10 which achieved an error rate below 0.1% recently – compared with 1% two or three years ago. Across its 27 qubit Falcon series, the error rate drop is exponential over the last two years, according to IBM quantum technical leader Zaira Nazario.

“One more order of magnitude, to one error in 10,000, will allow us to build chips that can run quantum circuits [analogous to programmes] with a few thousand gates with a fair degree of reliability. Those circuits are strongly believed to be impossible to simulate classically. Because of that, we believe that the level of gate fidelity in a system with say a few hundred qubits would lead us to quantum advantage,” said Nazario. 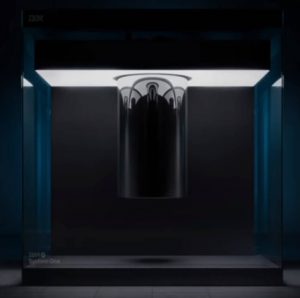 Last week IBM also announced a successor to its Quantum System One (rendered left), unveiled in 2019.

This is not itself a computer, but the cryogenic and electronic support systems for a quantum computer – which sits within the suspended cryogenic capsule. These systems include the microwave circuits that set and read the state of qubits, and the tightly-coupled classical computers that map problems onto the qubits. 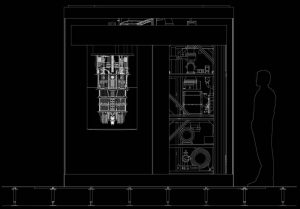 System One (also right), according to an IBM spokesman, is at its limits accommodating Eagle, which is why Quantum System Two is in the pipeline, sized for the company’s planned 433 (Osprey) and 1,121 qubit (Condor) processors.

“IBM Quantum System Two offers a glimpse into the future quantum computing data centre [rendered at the top of the page], where modularity and flexibility of system infrastructure will be key towards continued scaling,” said IBM v-p of Quantum Computing Jay Gambetta. “System Two draws on IBM’s heritage in both quantum and classical computing, bringing in new innovations at every level of the technology stack.” 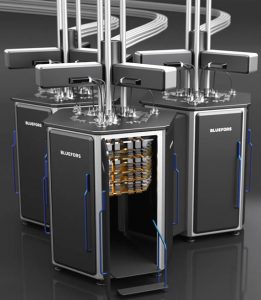 System Two gets its cryogenics from the Kide platform (rendered left) recently announced by Bluefors of Helsinki Finland, whose structural design “maximises space for the support hardware required by larger processors while ensuring that engineers can easily access and service the hardware”, said IBM. In addition, it “brings the possibility to provide a larger shared cryogenic work-space – ultimately leading to the potential linking of multiple quantum processors.”

The prototype System Two is expected to running in 2023.

For systems beyond 1,000 qubits, the company is also working on a ~3m tall 2m wide dilution refrigerator (codenamed ‘Goldeneye’). “Our team has designed this behemoth with a million-qubit system in mind,” it said.

Triple-band antenna is available at Mouser