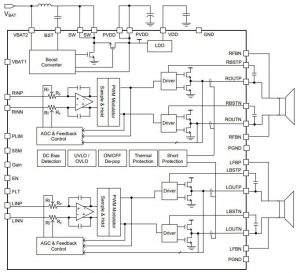 Unusually in a Class-D amplifier, there is a provision for audio feedback.

A pin is provided to program audio gain at 0.5dB steps, and the chip uses a 41-step automatic gain control to limit output power without clipping.

Supply voltage can range across 2.8 to 8.5V, and the boost converter output is regulated to 9.2V, operating in PWM mode at mid and high power, shifting to PFM to improve the efficiency at low loads.

“The integrated amplifier can achieve system efficiency of 92% at 7.4V,” according to the company. Shutdown draw is typically 700nA (5μA max).

The boost converter switches outside the audio band (>75kHz) to avoid audible noise from on-board components, and both the converter and amplifiers have spread-spectrum modulation for EMI suppression – allowing ferrite bead filters to be used.

A chopper-enabled integrator in the audio channels typically keeps dc bias across the speakers below 1mV.

The PAM8965 product page is here