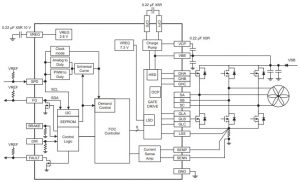 Called A89307, it uses field-oriented control to drive continuous sinusoidal current to the load.

“By design, electric and hybrid vehicles are quieter than traditional models with internal combustion engines, especially when they’re stopped, and drivers are becoming increasingly sensitive to noise created by components such as cooling fans,” said Allegro product director Steve Lutz. “The A89307’s hardware-based algorithm makes it easier for designers to reduce noise.”

No external sensors are required, nor software development as the designer selects parameters using a computer-based graphical tool and loads them into the IC’s on-chip EEPROM.

Gate drivers are built in for an external six transistor three-phase bridge. Motors up to 500W can be controlled.

Constant torque, constant power and constant speed modes are provided, as well as an open-loop mode.

Start-up controlled from a standing start, from wind-milling and even reverse wind-milling. Field weakening is included to improve performance at high speed.

While designed for battery cooling fans, the IC can be used in air-conditioning blowers and liquid pumps in traction inverter cooling systems.