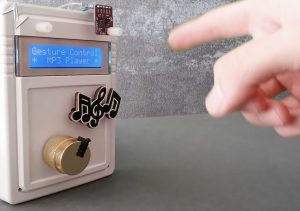 Setting the volume higher or lower, stepping to the next or previous track, and pausing the device altogether are among the gesture controls supported.

The Arduino team has highlighted the work of this Gadget Master, Norbert Zare, which was also featured on the hackaday.io website. Arduino writes:

“The classic MP3 player was a truly innovative device for its time, however with the advent of modern smartphones and other do-it-all gadgets, they have largely fallen by the wayside. In order to add a new twist, Norbert Zare decided to implement an MP3 player that not only responds to user inputs by moving the volume knob and tilting some notes to signal the next track, but can also be controlled simply by waving a finger in front of it.”

A PAJ7620U2 sensor is used to detect movements within a 3D space and output the results over the I2C bus to a host microcontroller, which has access to the device’s control. It uses a SG90 servo motor to select the relevant options via the player’s partially disassembled button pad…

This MP3 player is controlled with a twirl of your finger and wave of your hand: https://t.co/pb02S0qoXo pic.twitter.com/PxvBcnhP46

Check out the video below to see the device in action.